Everybody is stupid for someone, and that’s what I like about love. Love is the great equaliser. People do stupid things for love – we’ve all been there. You do things that are uncharacteristic, things that you’ve sworn off, or things that you’ve always said are lame or boring.

For instance, I have watched the Star Wars movies (long before I actually became a fan), and was bored out of my mind. In my defense, it was the prequels. I also recently went to a beer festival, and it was amazing fun, and the place was beautiful. However, I’m not a drinker, so it was ironic that I was there. But my boyfriend really wanted to go, so we did.

Obviously, he also puts up with my weirdness, the monthly mood swings and munchies, and overall blond moments. He handles it like a champ, though.

Asking to marry him after faking his own death

This one guy faked his own death and then asked his girlfriend to marry him. I’m sorry, but if my boyfriend does that I would say “No, you sick fuck”. Honestly, this guy went the whole nine yards. He got a movie director, makeup people, stuntmen, etc. to make it look as real as possible.¹

Another crazy guy thought if his ex-girlfriend saw him getting shot and in pain she would take him back. So, he got his friends to shoot him. The guy was in pain, but still, the ex-girlfriend would not take him back (I wouldn’t either – that’s just asking for a bunch of crazy).¹

Cuddling with a corpse

So, we see a trend of ‘crazy’ here. One guy, Carl Tanzler, basically stole the corpse of his crush and lived with it for seven years.¹

He worked at a hospital and the woman, Maria de Hoyos, was brought in as a tuberculosis patient. Carl tried everything to save her, plus giving her many gifts, but she didn’t make it.

He had a mausoleum built for her and visited it every night, but later he decided that visiting it was just not enough and took the corpse to his home. He modified the corpse with a wig and glass eyes. I don’t even want to think about everything he did to that corpse – ew. Thankfully, he was eventually arrested.

This one hit me right in the feels. In the 1950s a Chinese couple (Liu Guojiang and Xu Chaoqing) ran away from their village and lived together in a cave. The reason why they did this was that society frowned upon their relationship. Lui was a nineteen-year-old boy and Xu was more than 10 years his senior and a widow with kids at that.¹

They lived in the cave with Xu’s kids. After numerous years it became harder and harder for the elderly couple to climb to the cave. For this reason, Lui spent half a century carving a 6000 step ladder for Xu. This makes me believe even more in love. 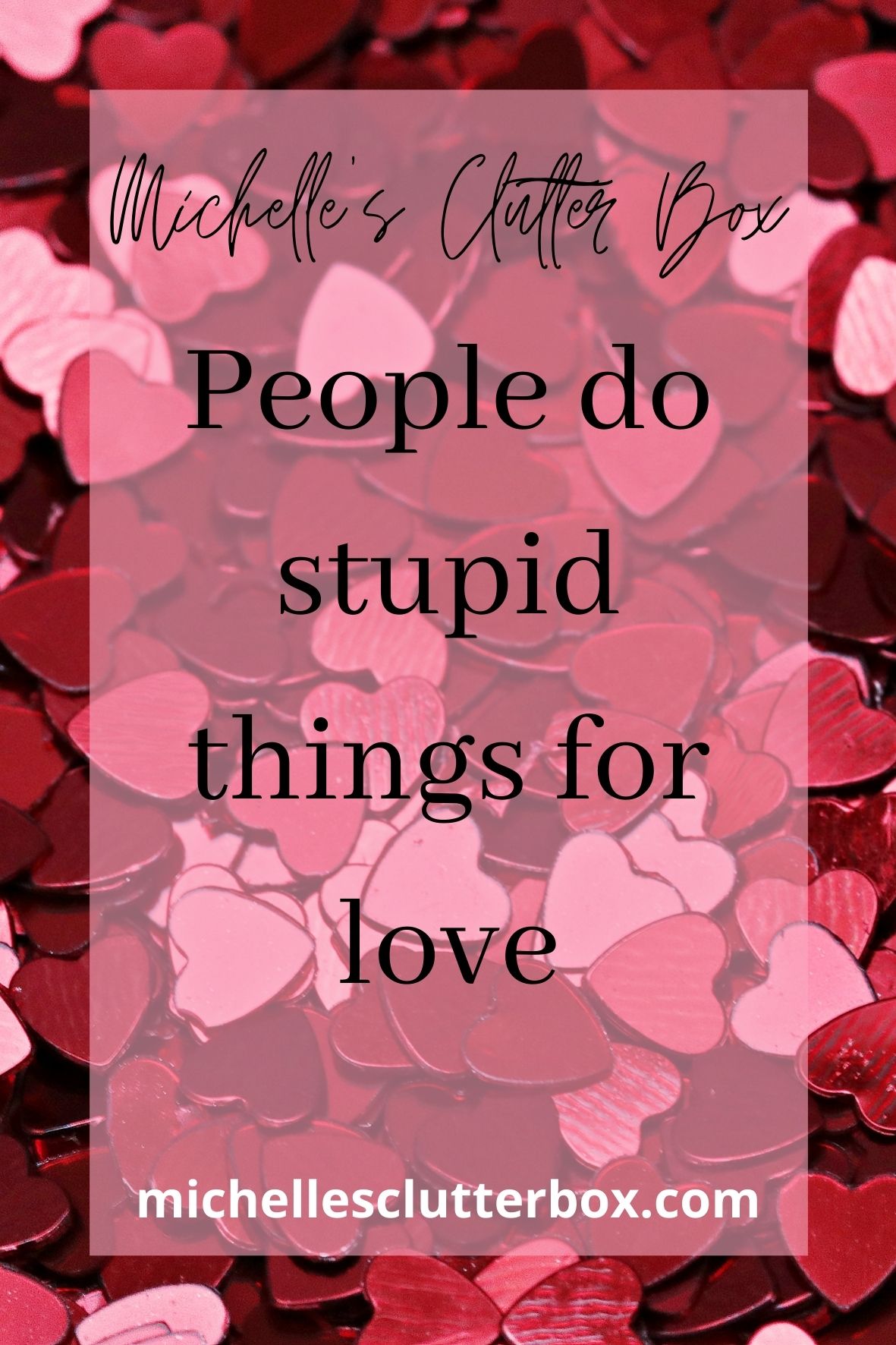 A few short ones

These ones didn’t make the news – they’re just random people on the internet.

The more general ones

There are several more common stupid things that people do for love.

Here I’m not just talking about moving to another city –there are people who have moved across countries and even across the globe to be with their significant other.4 I’d love to move away from this dead-beat place with my special person. My mom moved with my dad to another town for about two-three years for his work (they still fight about it)

Some people quit their jobs in the name of love.4 For example, my mom quit her job when they had us. I’m not sure if it was her own decision. I’ve heard of other people who quit their job because it was putting their relationship in danger i.e., they were constantly working and didn’t have any time to spend with their partner.

People lose friends because of relationships, although I don’t think that is healthy.4 This especially happens when your SO is jealous and a bit crazy. They don’t like that you spend so much time with your friends and not with them. Obviously, at the start of a relationship you’re going to spend a lot of time with each other and friends will take a back seat for a while, but it’s important to try and maintain balance and all relationships, otherwise, they may resent you.

Some people make the mistake of changing because of their significant other.4 It can be either good or bad. It can be bad in that you start drinking or smoking and partying to be with the person. Sometimes it can be good when you learn new healthier habits, like losing weight or stop smoking or drinking. However, I feel like that is not sustainable, because the only person who can truly change you is you. If the change wasn’t for yourself you might also end up resenting the person.

Relationships are expensive. Obviously, you want to go on dates, and you want to spoil each other, but damn, don’t get yourself into a massive amount to debt to do it. I would say, if money is a problem, have a conversation about it. If they care about you, they will also want your finances to be healthy.

Watching series behind their back

You will not believe how many people I know watch series behind their significant others’ backs. You as a couple discover a series together and promise to watch it together, however, curiosity gets the better of one of you and then you have to pretend to be stunned at the ‘shocking revelations’ that occur onscreen.

Yep, people really do stupid things for love. Have you ever done something stupid or crazy for love? I’d love to hear about it – contact details below.

P.P.S: I used these websites as sources