Let’s talk about ‘The Umbrella Academy’ season 2. You’ve had more than enough time to watch it, so don’t blame me for spoilers. It’s been a long time since a series has sucked me in like this one, and now I’m stuck waiting for season three.

Season 1 ended with a major cliff hanger and I couldn’t wait for season 2. Basically, it ended where Vanya used her powers and it broke off a piece of the moon which came hurtling towards earth and then caused the apocalypse for that timeline. However, Five could transport the siblings back in time.

I’m assuming you’ve watched season 1, so I won’t go into the background of the series (but you can watch this if you want a recap).

A summary of season 2

In a very brief summary, the Hargreeves siblings are in the early sixties and have to stop another apocalypse. The assassination of JFK also plays a major role in the series. That’s the gist of it.

That the siblings have to stop another apocalypse is made clear from the get-go, but I’m getting ahead of myself.

Like I said, at the end of season one, Five transports all the siblings to the early 1960s. They all end up in Dallas, Texas, but not at the same time.

In the first episode, all the siblings land in Dallas over three years. Five lands last and sees the siblings engaged in war. The Soviets have attacked the US, and a bomb goes off that causes the next apocalypse.

Hazel from season one shows up and takes them (himself and Five) back 10 days. He gives Five vital information on how to stop the apocalypse, although cryptically. Later, it’s insinuated that the siblings in the sixties have influenced the timeline and caused the apocalypse.

Hazel is then killed by three, very bleach-blond, Swedish guys (called the Swedes). Five gets away and has ten days to save the world – again. This all takes place just a few days before the JFK assassination.

The siblings have to band together again to save the world, but trouble is looming.

The Swedes are after the Hargreeves. The Handler (oh yeah, she alive) and the Commission hired them. Apparently, the Swedes just want to kill everyone. They also falsely get instructions from The Handler to kill some of the Umbrella Academy members.

What have the Hargreeves been up to?

The siblings have gone on with their lives since dropping into the sixties. Let’s go through them:

Luther works for a mob boss. He does fights for him and acts as security.

Diego is in a mental institution. Diego is determined to save JFK from getting assassinated, but during that time it’s all crazy talk.

Allison is dropped right in the middle of the South during Segregation. She is part of the civil rights movement along with her husband, Raymond.

Vanya was hit by a car, lost her memory, and works as a nanny for the woman who hit her. 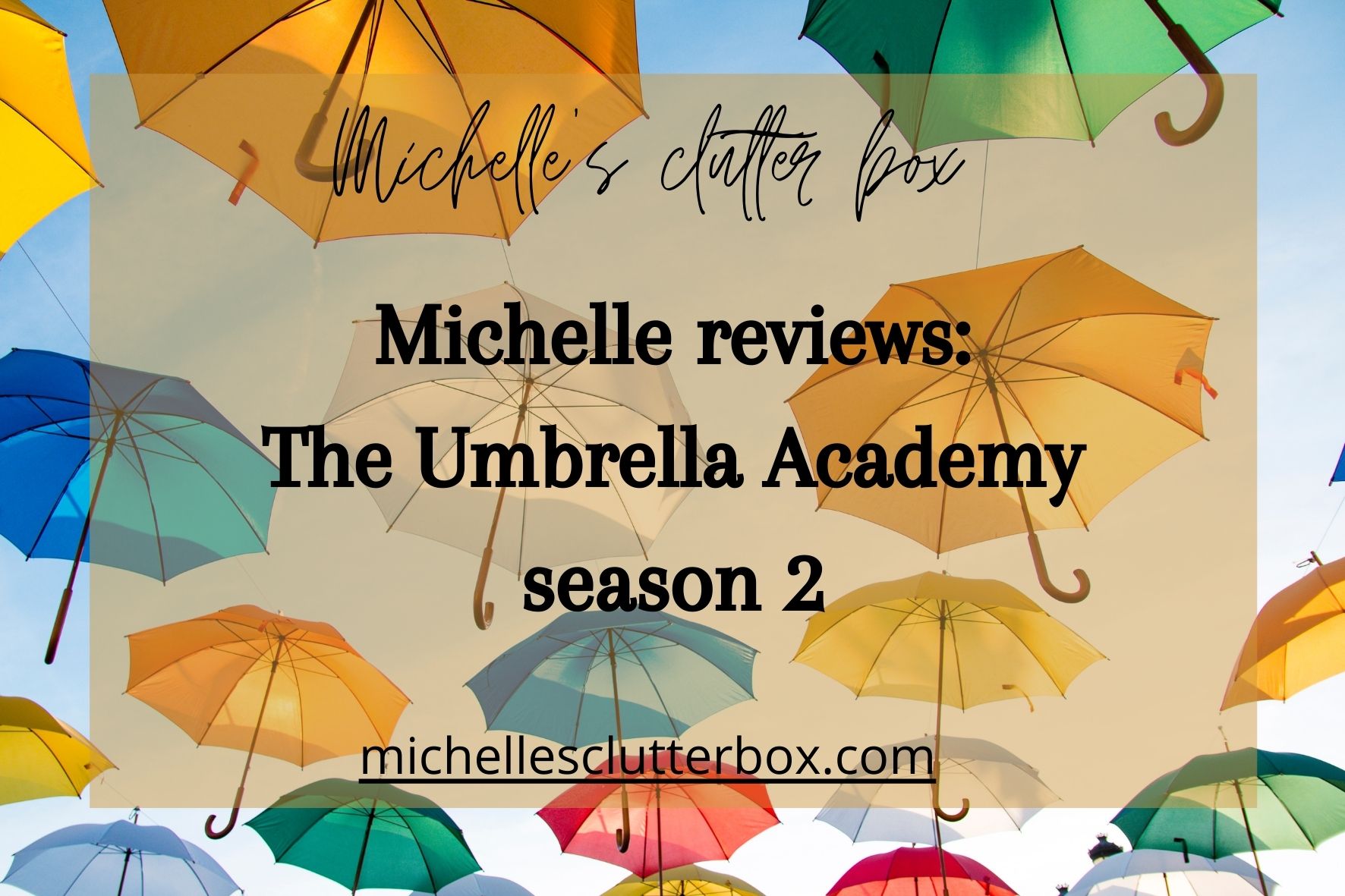 As I said, The Handler isn’t dead after all. She had a plate put in her forehead years before and survived Hazel’s shot in season one. So she’s back. I hate it when shows do stuff like that. You can never trust it when someone dies.

The guy at the Commission who replaced her is a fish. It’s a dude with a human body, but a fish tank and goldfish as a head – weird.

Then there’s a lot of internal conflict at the Commission; so much so that a rebel group forms within the organisation.

Later Five and Diego see a video from the future of Kennedy’s assassination (a tape that Hazel gave Five) and they suspect that Reginald has something to do with the assassination. They go in search of Hargreeves.

A group called the Majestic 12 is introduced later in the season. It’s a secret government group. The siblings think their dad is also part of it.

They suspect the group is responsible for Kennedy’s death because he wanted to expose them. Five overhears just enough from a Majestic 12 meeting to know that they discussed Kennedy in Dallas.

The siblings meet with Hargreeves, hoping that he can help them. However, they don’t get far with their father, because they’re acting crazy.

Five will do just about anything to save himself and his family. He makes a deal with The Handler that entails killing the entire Board of Directors of the Commission. He agreed, and the deal was that she would give him a briefcase that would take them back to 2019. It all seemed like a set-up, to be honest.

Five killed the Board of Directors, but the plan didn’t work out because he didn’t have enough time to round up his siblings. After the mass killing, The Handler is the new person in charge at The Commission.

Enter Vanya. When she wants to run away with Sissy, the police stop them and Vanya uses her powers on them. Then she is taken away by the FBI who interrogates her. Chaos ensues. She would have been responsible for the apocalypse (again) but the siblings save her.

Lila dragged Diego to the Commission to work in security. However, he escapes orientation and finds the infinite switchboard. He finds out that Vanya will cause the apocalypse and is helped back to Dallas by a group of resistant agents at the Commission, headed by Herb. Diego goes back to warn the siblings and they save Vanya (and themselves).

The ultimate plan to get the siblings out of the sixties with a briefcase that older Five has – he’s also in Dallas. They meet and make a deal. Young Five will trade old Five the correct calculations to go back to 2019, but in the correct body (old man’s body) in return for the briefcase. The plan almost works.

We find out that the relationship between The Handler and Lila is not what it seems. You find out that The Handler had Lila’s parents killed and took her in as her own daughter. You see why she did it in the last episode.

Also, we find out that Reginald is an alien. I knew it! He’s an alien in a human suit.

The last episode sees all the siblings on Sissy’s farm (to help Harlan – he got some of Vanya’s powers when she saved him earlier in the season).

Lila and The Handler show up and they’re there to kill the person responsible for the murders of the board of directors of the Commission. I hate that woman.

The Handler also summons thousands of Commission agents to get the Hargreeves. The siblings run to escape them, but after Vanya finishes the agents, they are only left to deal with Lila and her mom.

Then we find out that Lila also has superpowers – she can mirror the powers of the siblings. Lila is probably another sibling because she was also born on 1 October 1989. She is one of them, but Hargreeves couldn’t adopt/buy all of them.

Five is still alive but in terrible shape. He uses his last strength to go back in time a few seconds and disarms The Handler. Lila grabs the briefcase and gets away.

The Swede and Five decide they’re even and call a truce. Vanya then gets to Harlan and extracts her powers from him.

Herb gets there and is now in charge of the Commission. The siblings get a briefcase and go back to 2019.

The house looks different and a portrait of Ben is above the mantle, not to mention Reginald and Ben are alive.

It’s not the Umbrella Academy, but the Sparrow Academy. Something has gone terribly awry.

In true Umbrella Academy fashion, the last episode ends with a huge cliff-hanger.

It seems like everyone has a love interest in this season except for Five, which I prefer. It was so weird when he had his mannequin as a wife/sex doll.

Allison married Raymond, and they are part of the civil rights struggle in the South.

There’s still a weird thing between Luther and Allison. Ray bought Allison a book as an anniversary gift, “From the Earth to the Moon”. He saw her stare at the moon often, obviously because she misses Luther.

How is this thing between these two going to work out? Is it always going to be a ‘will they, won’t they?’ situation?

Diego meets Lila in the psychiatric centre – which they break out of, and she becomes his love interest. From the start you know there’s something a little off about her, but you only find out what her story is much later.

Vanya also found a little love… with a woman. I did not expect that. Something brews between Vanya and Sissy. It’s just weird that suddenly Vanya is into girls. Or was she bi all this time? Guess it doesn’t really matter.

Remember Dave from season one? Klaus fought alongside him in Vietnam, and they fell in love. Well, Klaus finds him again (his younger version) and wants to convince him not to enroll in the military – which only causes a lot of conflict and he enrolls, but into the marines.

Reginald Hargreeves also has a girlfriend, Grace. What’s weird is that she looks exactly like the siblings’ robot nanny.

Even Ben has a love interest. He’s infatuated with Jill, who is a member of Klaus’s cult. In pursuing his love, we find out that Ben can possess Klaus, which he does to get busy with Jill.

Expect new bad guys, more plot twists, and love interests – the series has it all.

It’s very much the same storyline than season 1, but it’s made so super engaging. The characters develop in unique ways and you also get to see more of Ben and what he can do.

It was so cool to see how all the Hargreeves coped with being thrown into an unknown world.

I love the pop culture/future references that Klaus gives to his followers; like when he gives the advice of ‘Don’t go chasing waterfalls, stick to the rivers and lakes that you’re used to’ and naming his cult Destiny’s Children.

You also see the siblings use their superpowers again – mainly in the first and last episodes. So many plot twists in the last episode regarding powers!

Can we say something about Five, played by Aidan Gallagher? He’s sixteen years old, and he plays his role magnificently. He really does the grumpy old man thing really well.

What did you think of the Umbrella Academy season 2? Any other shows I can binge-watch? Let me know in the comments.