It’s lockdown here in South Africa, and we all deal with it in different ways. Many people are baking banana bread, I haven’t baked much of anything, although I have been eating like a crazy person. During this difficult time, I have turned to computer games. My boyfriend is a gamer and he’s been trying to get me to play games for the longest time. It only took a world-wide pandemic for me to give it a try – what do you know? So, my question is, why do people love playing video games, what is the psychology behind it?

I’ve come to enjoy the few games I’ve played so far, so this should be interesting.

I think if you were to ask any avid gamer why they like gaming, they will probably say something like it helps them to escape the harsh reality of being an adult – or you know, something like that. It kind of makes sense because in a game you enter this other universe which is probably a lot more interesting than our own, and you can do a whole lot of cool stuff that mere mortals simply can’t do in real life.1,2

Yes, playing games have an element of escapism in it, but according to psychology, there are a few other reasons why gaming is so appealing.1 The feeling of wanting to escape is not necessarily the reason why people play games, that might not be the reason at all.2

People like being good at stuff – that’s what it comes down to. We like it whenever we’re good at something and get some kind of recognition for it, for a lot of people that is what success means. This is true in many aspects of our everyday life. It’s great when we’ve mastered a certain skill and then succeed in a mission because of that skill.1,2

You can see how the above is built into most games. With a lot of games, you can clearly see how far you’ve come and progressed in the game. Most of these games also have some kind of reward system. You can collect points, or go to the next level, or your character can get another ability – it depends on the game.1

The competency or difficulty level mustn’t be too high or too low. The game shouldn’t be so difficult that you continuously feel like you’re failing, but it should also not be too easy so that you don’t feel like you’re being challenged at all – it has to hit that ‘just outside of your comfort zone’ sweet spot.3

The desire to be independent is strong with us humans. People like feeling in control, it’s probably how we as a species have survived for so long (that, and we have guns…). But, in real life, it’s a tough call feeling in control all the time. However, in games, it’s quite easy. In what’s called “free-roam” games, like Grand Theft Auto, the player has the license to walk or drive around as they like, they don’t have to follow a set path.1,2

Also, in a game, if you make a mistake, it’s no biggie (usually). You can simply try again and again.1

This entails that we as people want to feel like we’re important and matter to other people. We also like making a difference or contribution to our context. Multiplayer and online games give you this feeling of relatedness. Research shows that even if we’re not playing with other human players, one can relate to fictional in-game characters. You feel like you matter when engaging in dialogues with these characters and when you go on quests to help them sometimes.1,2

Gaming fulfils all the above-mentioned psychological needs in such an efficient way, that other activities just cannot compete with it.2 This explains somewhat why people love playing video games.

Other motivators to play video games

Many other things make gaming exciting and engaging for the players. There are three main motivators for gamers. Firstly, there is the fact that you feel like you are achieving something in the game. It could be moving up a level, or simply wanting to be better than others (for the competitive types). Secondly, gaming can be very social, contrary to popular belief. In co-op games you form part of a group in a mission, you can chat with other players and even form friendships in that way. Lastly, there is the feeling of being immersed in the game. There are many ways in which you can do this, you can customise your character in some games, and create this identity for yourself. Further, you can get lost in a game when it’s very engaging.3 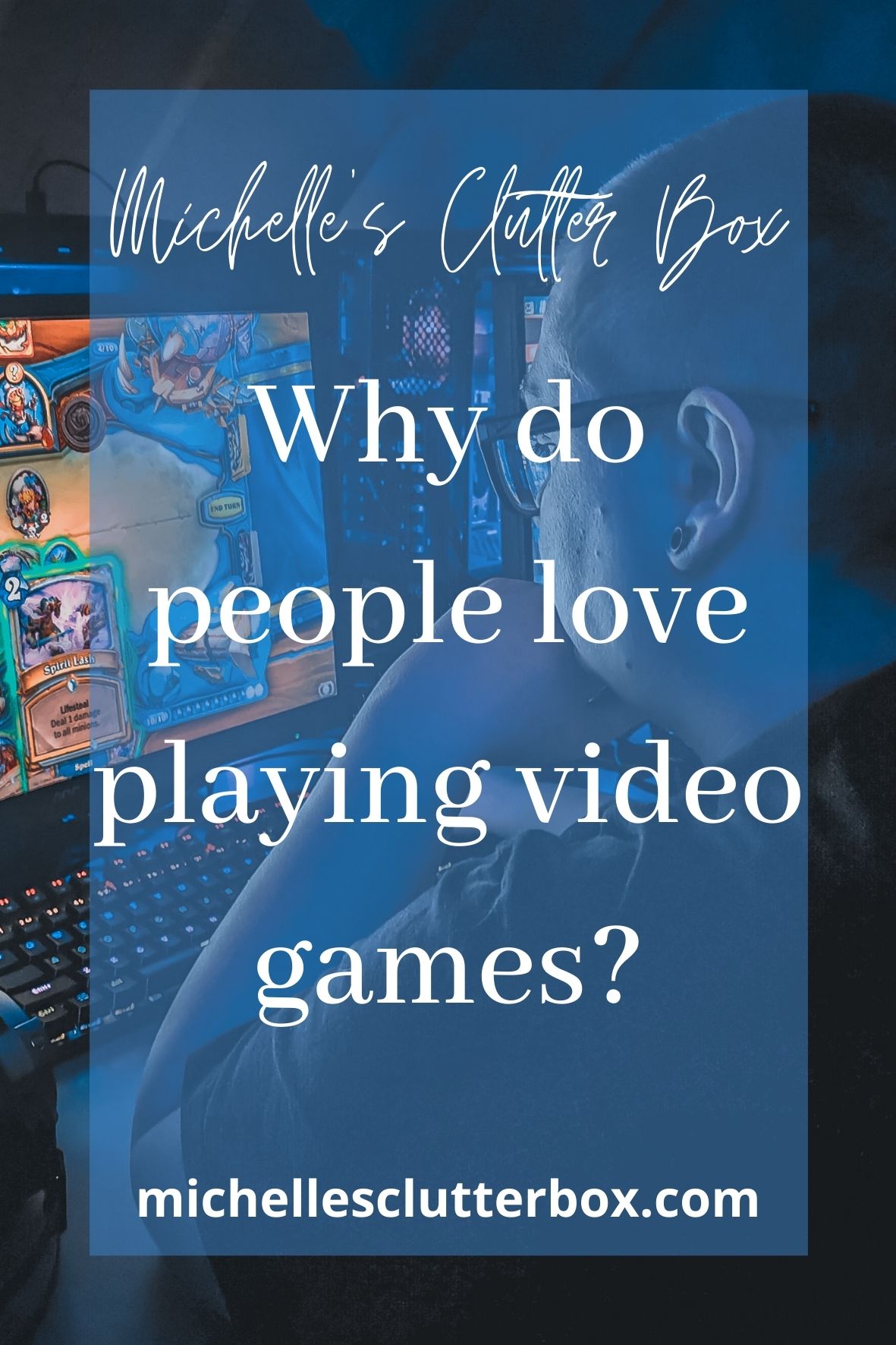 When you think about it, games can be a lot of work. For example, you can spend hours completing a level or mission. Obviously, games are much more enjoyable than creating and updating endless spreadsheets. Why is that though? It’s because a game has a storyline worked into it. The story and our involvement in it make us feel important, so that we become emotionally invested in it, and all the feedback that I mentioned earlier also motivates you to keep going. So, in this way work and play are quite similar, but games have a smart way of keeping you engaged.2

Also, at work, the effort that you put in and the amount of appreciation or feedback does not always line up. It can be discouraging when you’ve worked very hard on a project and no-one takes notice. The opposite is true of games, the amount of hard work and the feedback or appreciation you get matches up.2

Other physical and cognitive benefits

It’s impressive how certain types of games can fine-tune some of your skills. For example, research has shown that first-person shooter games improve visual perception. These gamers can pick up and process the information on a screen very quickly. This seems like an important skill in everyday life. Further, another study with surgeons, showed that surgeons who are gamers or who played games earlier in life have better surgical skills. That is insane.2

When video games become a problem

The danger with too many games is that you might not address the above-mentioned psychological needs in real life because you get them in the game. That is when the ‘escapism’ of gaming becomes a problem – when you avoid sadness or unfulfillment in real life.1

Yes, games and excessive gaming can harm a person, but one must not disregard the positives.4

Now I feel like playing a game, how about you?