If you’re a woman, you’ve probably had to get rid of a creepy guy at some point or another. When a simple ‘no’ won’t suffice, you need a backup plan. So, let me tell you about the creepiest guy I have ever encountered and how I (mostly) got rid of him. Also, I searched the internet on how to get rid of a creepy guy, but I’m getting ahead of myself.

Please don’t judge me for this story.

When I was an undergrad student at university, I practically lived in the campus computer labs. This was because I didn’t have an internet connection or printer at home.

When you printed documents, you had to go to the designated desk in the lab, swipe your student (for payment), and then they would print your stuff and give it to you.

Obviously, this was a service that I desperately needed for my studies and hence I was nice to the people who worked there (and also because I’m not an asshole).

This one guy who worked there was a short black guy. When I say short, I mean short. I once saw him driving in the parking lot and the guy could barely see over the steering wheel – it was a funny sight, actually.

This guy took a weird liking to me for some reason. It’s not like I flirted with him or anything. Geez, we barely talked. Every time I printed something; this guy practically undressed me with his eyes. Believe me, you can see creepy/crazy in someone’s eyes. It was so creepy and super uncomfortable.

It got so bad that whenever I had to use the labs for printing (there were four venues/rooms in the building), I’d have a quick look around and go to the one where he wasn’t working. Then when I printed something, suddenly, he was working in that venue. He would swap places to be in the same venue as me.

I think we can all agree that this was one creepy guy.

How I got rid of him (mostly)

So, one day this guy asked me: “Would you ever date a black guy?”

This is where I panicked. For starters, I honestly do not care what race someone is, as long as they’re cool. But in this case, it was tricky for two reasons.

If I said ‘yes’, then the guy would ask me out, and when I would inevitably reject him, he would have made life difficult for me in the labs. If I said ‘no’, this guy and all his colleagues would think that I’m racist. I didn’t want to go out with this guy, not because he was black, but because he was creepy as hell.

I said that I was a lesbian. I said I panicked, okay? (It’s kind of funny because at that point my best friend and I were very close and many people thought we were lesbians.)

A few days later I had to print something again. This guy was working in the venue (no surprise there) and chatting with one of his colleagues. She saw me and said that this guy liked me and wanted to marry me. The guy said, ‘Stop, you’ll scare her off.’ That’s when I thought: ‘Oh honey, that ship has sailed.’

In my fourth (Honours) year, I started working and could afford to get a printer and internet connection at home. Hence, I was freed from the computer labs.

In my postgrad studies, I still worked on campus and saw that creepy guy around sometimes. He would look longingly at me from afar, and then I would look away. 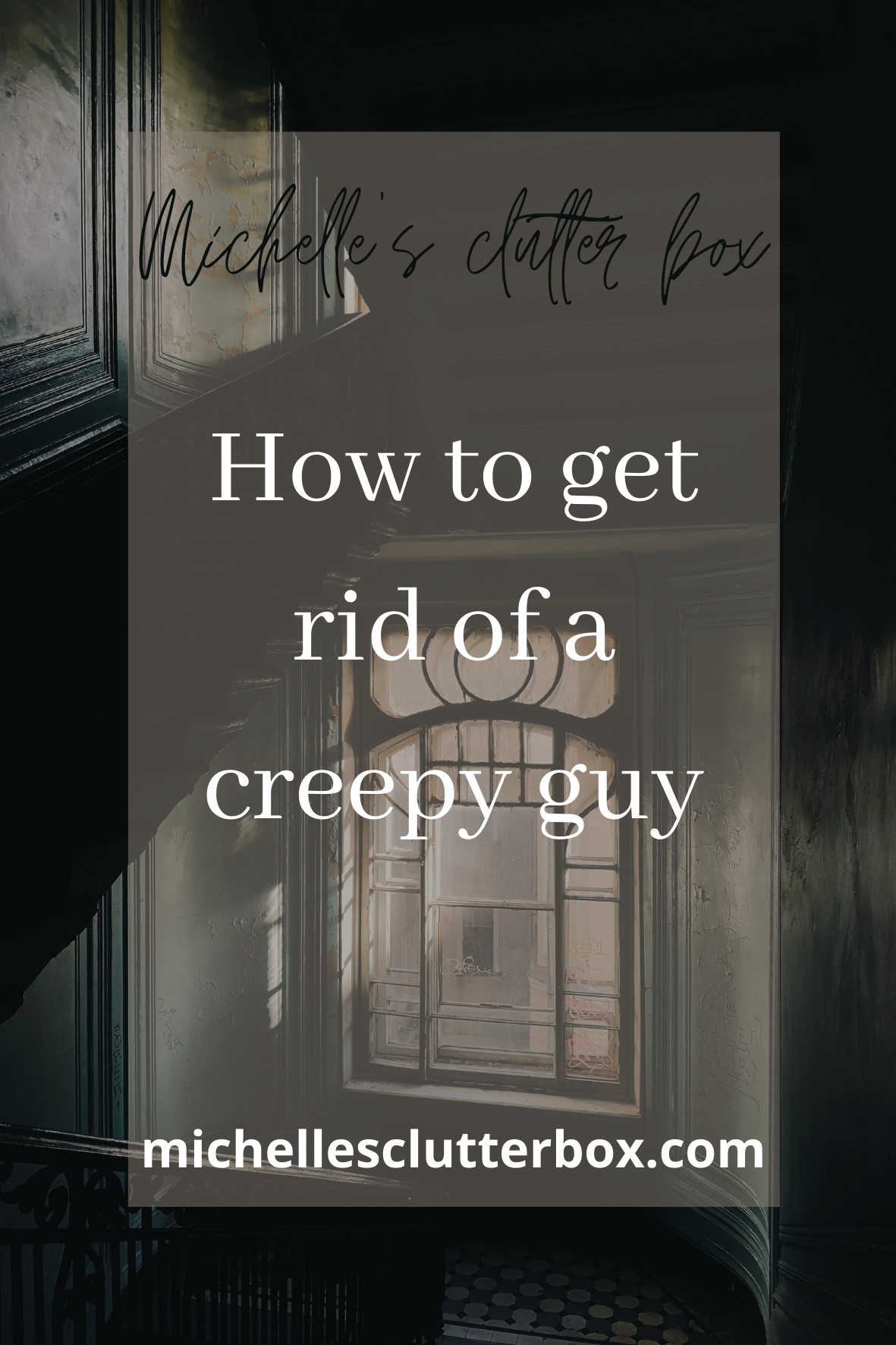 Luckily, I have a black belt in karate now, so I’m not afraid to tell someone to kindly ‘fuck off’ when they’re being creepy. I also have a boyfriend, but for some guys, that’s not a reason to stop.

The question is, if you don’t have ninja skills, what do you do to escape a creepy guy situation?

I searched the internet for a few tips on how to get rid of a creepy guy and also found a few stories of how real women deal with those situations.

There was a guy on Twitter who made photos available of himself (not dick pics or anything inappropriate like that). Women could then send creepy guys on social media (like in their DMs) these photos to ‘prove’ they indeed had a boyfriend (read the story here).

The first route is to kindly tell the guy that you are not interested in him.3 (I would also suggest not ‘staying friends’ with a creepy guy because that will just make them think they still have a chance. That’s if you already know the guy.)

Or tell the guy you have a boyfriend and then show them a picture of you next to a really buff and tall guy (use a guy friend for the picture if you must).1,3

If the guy persists, you can give said creepy guy a fake number or your real number and then just block them, but even these options have their drawbacks. Apparently, there is an app that lets you give a guy a fake number which seems legit (your phone rings when it’s called) but the guy won’t have any of your actual personal information. Read the story here.

If the guy already has your number and they continue to call and text, ignore it, and hopefully he will get the message.3

There are also more dramatic measures like blocking the creep on all your social media pages and even changing your number so that he can’t contact you. Changing your number can entail a lot of admin, so it’s up to you if you think it’s necessary.3

You might also consider getting a big dog if you’re afraid the guy might show up at your house or ‘bump into you’ when you’re out walking or jogging.3

On that note, also consider taking different routes to your place of work, school, etc. if you’re afraid that said creepy guy plans on ‘coincidentally bumping into you’.3

If this guy is seriously creepy and you are concerned about your safety, definitely alert your loved ones, colleagues and boss know about the situation. If they’re in the know they can alert the police or security services if he makes an appearance where he doesn’t belong, like your place of work.3

In extreme cases, you might even have to get a restraining order. Also, make sure that you have proof of the troubling interactions you’ve had (like text messages), or where said guy harassed you.3

The fact that some guys can’t take no for an answer is concerning. Honestly, I don’t know what to do about it. To all the good men out there, please educate the creepy among your gender – it will be highly appreciated.

Ladies, please stay safe. Also, let me know if you have other suggestions for this problem.

PPS: I used these sources:

Little things we all have in common