It’s the scary season, so I have to write something Halloween related, right? For most people, Halloween means horror movies, but I can’t watch them. First of all, this entire year has been a horror movie, so we really need no more of that. Secondly, I don’t understand the appeal of the genre. Why would I want to be scared? Besides talking about why I hate horror movies, I also researched why some people love it.

My problem with horror movies

As the title states, I hate horror movies. How is scaring yourself shitless (and often paying quite a lot to do it) fun? How is that entertaining? I don’t think of horror movies as entertaining; I think of them as masochism.

The primary reason why I hate horror movies is that I have an over-active imagination. Those movies stay with me longer than they should. My imagination is both a blessing and a curse.

What the actors say

Two of my friends are both lovers of, and experts on horror films (they’re also actors). We once had an interesting conversation about the genre.

Horrors always target a specific fear, be it the fear of small spaces, not being heard, not being in control, etc. Humans have evolved so much that we are used to being the predator but in a horror movie we become the prey again – that’s what scares us. It takes us back to that primal fear.

But that doesn’t answer why people love it. So, I went in search of an answer on the internet. 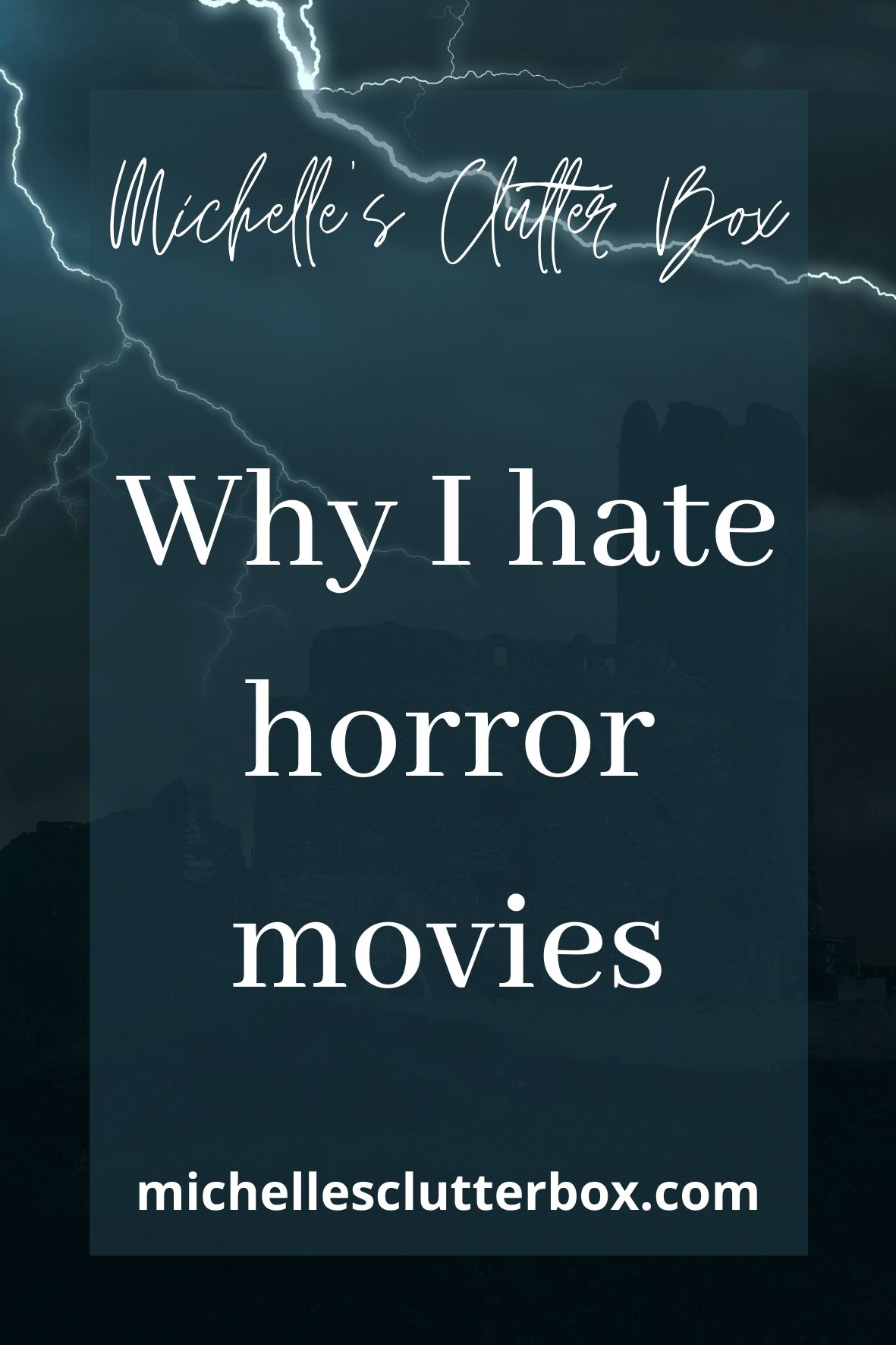 There is no single theory that comprehensively explains why people love horror movies. There are plenty of academics who have written about the topic, and I’ll present the most prominent hypothesis. I don’t necessarily agree with all of these, but who am I to question science?

Much like my actor friends, some theories that state that horrors target our primal fears, but there’s more to it. These fears would minimise our chance of survival if they were to happen.

Horror movies let us as the viewers rehearse (only in our minds) what we would do in those scary situations, but in a safe environment.1

Deal with other fears or problems

Horror movies can help you deal with fears and anxiety – apparently. Like I said above, it helps you to rehearse mentally how you would deal with a fearful situation. In addition, it also helps with anxiety because you can ‘test’ your limits of what you can endure in a safe environment If it gets too scary you can always look away or even switch off the movie (if you’re watching at home).2

I guess it makes sense because horror movies are pieces of fiction and the viewer knows that. That mental distance between what transpires in the movie and the viewer makes the above mentioned possible.3

There are also theories that by watching horrors you can kind of purge yourself of negative pent-up feelings within you, like aggression.3

On a similar note, others theorise that horror movies may also help people to distract themselves from other negative feelings or problems.2

Some people want that pleasure of experiencing deep fear during a horror movie and then having a great sense of relief when the movie is over.1 In other words, some people like to be scared by a movie. They want that thrill, but there must be some kind of resolution at the end of the movie. For example, the baddie gets killed.3

Some people love horror movies for the thrill or adrenaline rush they get from it.4,5 Research has shown that people who crave sensation are more likely to like horror films.2 Also, they get the thrill while being in a safe environment, so they won’t face any tangible negative consequences from it.4

(Personally, if I want to get a thrill, I try to make conversation with a stranger.)

A way to make sense of the world

Another reason why people like these films is because it unravels or explains evil within some kind of model. People have moved away from the religious explanations of evil and rather go for the films.2

Many horrors address relevant real-world issues, and that is also why many people love them.5 They ‘reflect our societal fears’ and issues.3

I agree, a lot of horror movies have serious themes and address societal issues, but then you have to look beneath the surface, and frankly, most people don’t do that. They take their entertainment at face value and forget about it.

The monster is on the inside

There’s a popular theory that states that every person has a ‘monster’ inside of them, and we secretly enjoy seeing mayhem unfold in a horror movie because we wish we could be part of that.5

Sometimes people like horror movies because bad people get what they deserve – whether it be a punishment for underage sex, drinking, whatever you can think of.3

On the other spectrum, you as the viewer could get a thrill from rooting for the good guys to defeat the monster.5

For some people, it really is just a way to kill the time (pun intended).2 In addition, a horror movie is a novelty, you see things in it you would normally not see otherwise.4

Well, there you have it. Those are some reasons I found why people love horror movies, but I still hate them. If I want to see something scary, I’ll watch the news.

If you’re a horror fan, please leave a comment to tell me why you love the genre.

I used the following sources: